This walk is loved by the people of Boulogne and will delight visitors. A walk on the ramparts provides time to relax and reflect.

Surrounded by walls since the Roman era, the old town of Boulogne-sur-Mer has a superb collection of fortifications to admire. Occupying a strategic location since the 2nd century, the city has always sought to defend itself. The fortifications which can be seen today were built between 1227 and 1231 by Count Philippe Hurepel, the son of King Philippe Auguste. They were constructed on top of successive enclosures created by the ‘Classis Britannica’ Roman camp. Boulogne-sur-Mer remains one of the most prominent medieval fortified sites in the Hauts de France region to this day.

The fortifications in Boulogne have evolved over the centuries and bear witness to an exceptional history, as well as providing a superb walk. The four gates, the location of which has not changed much since ancient times, provide access to the ramparts. Beautiful views across the whole city and the flower-filled gardens at the foot of the ramparts can be enjoyed during this very pleasant walk. The old guard tower, once occupied by soldiers, is a delight for joggers, walkers and lovers of old buildings.

A walk full of history

Starting from the Castle-Museum, the centrepiece of the fortifications, you can take in superb views of the great buildings in Boulogne. The Notre-Dame Basilica and its beautiful surroundings can be seen from the Tour Porquet. From here, you can also admire the thickness of the walls surrounding five of the nine towers. A little further on, located on the steepest slope, is the ‘Porte des Degrés’ - one of the four gates to the 13th century citadel. Its name is derived from the steps in a staircase and it surely must have always been for pedestrians only! From the ‘Porte des Degrés’ it is the western slopes of Boulogne-sur-Mer which now open out before you. The ‘Porte Neuve’ (also called ‘de Calais’) was reconstructed in the 17th century and has towers with spurs. It is an amazing walk which is sure to leave you wanting more. 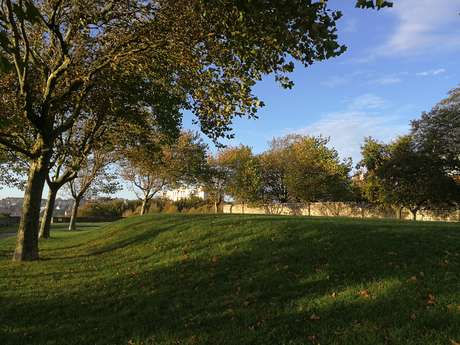